Under growing pressure from the Muslim world, the Obama administration has been forced to deplore the content of a provocative film that denigrates Islam. But Washington has also said, “America’s free-speech rights allow such films to air!”

White House Press Secretary Jay Carney says the Obama administration condemns the violence in the Muslim world the anti-Islam film, called “Innocence of Muslims,” has triggered. He also says the attacks on US facilities and embassies in Egypt, Libya and Yemen were unjustified. The attack in Libya killed four US diplomats, including the ambassador.

As always, Western mainstream media are trying to deceive public opinion and interpret the making of the film in the light of freedom of speech. However, the whole world has already witnessed that hurting the sentiments of over one billion Muslims does not fit in the definition of freedom of speech. It is an affront not only to all Muslims but also to the believers of all faiths and religions.

It is a point well taken by many western pundits as well. In their words, “The US-made film is a perfect candidate as an exception to free speech rights since its creators deliberately focused on fermenting violence.”

Of course, we all know that one of the cornerstones of any free democratic society is the protection of freedom of speech and thought (The Good). Such a society cannot thrive if its citizens are not able to freely express their views and opinions. But sometimes, so much liberty under the guise of “free speech” could lead to racism against ethnic minorities. A case in point could be the current wave of Islamophobia (The Bad) in the West. 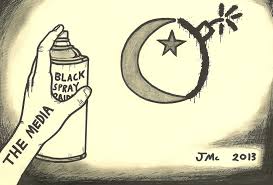 Nevertheless, there could be several explanations for the sheer intensity of Muslim anger over this enmity. An important one is that Muslims know the powers in the West today want to degenerate their Islamic societies into a godless society by encouraging and normalizing sacrilegious practices such as slandering and trivializing Prophet Mohammad (PBUH) with the help of mainstream media and secular currents. To this end, the powers in the West want to make sure that the mosque, although highly visible and active, also remains powerless to redirect the rushing secular currents in a society mired in a moral and spiritual crisis.

With the removal of God and the sanctity of His Prophet Mohammad (PBUH), the powers in the West can then force or encourage Muslims to choose the path of rejecting God and His ways, and systematically remove the Holy Quran, prayer and religious discussions from classrooms, cultural centers and places of public gatherings. Once these secular societies become morally bankrupt and openly hostile to Islamic values, the powers in the West can then trivialize and ridicule Islam and Prophet Mohammad (PBUH) in the name of freedom of speech or humanistic and pluralistic concerns, and reap the dire consequences of rejecting God.

Another explanation is the perceived hypocrisy of Islam being associated with terrorism by Western countries, which have participated in the slaughter of tens of thousands of Muslims in the Middle East and North Africa in the name of the so-called “war on terror.” The other explanation is that many Muslims believe the anti-Islam film has nothing to do with iconoclasm and everything to do with the wave of Islamophobia sweeping Western societies.

Europe’s millions of Muslims are an increasingly embattled minority. The far right no longer directs its hatred against Jews or blacks – their targets of choice are now Muslims. So the release of the anti-Islam film cannot be divorced from the context of rampant Islamophobia in American society either, where racists and extremists claim that “Western civilization is threatened with destruction at the hands of a Muslim plan for global conquest!”

The rising tide of European Islamophobia has spilled far beyond the confines of the far right, though. Just like America, in Europe violence against Muslims continues to mount as the media stirs hatred – under the guise of freedom of speech and expression. For instance in Britain, Muslims find themselves increasingly on the receiving end of police intimidation and stop-and-search routines.

But Muslims are not just the victims of racist persecution. They also represent one of the most oppressed and impoverished sections of the working class. According to a recent EU study, over two thirds of British Muslims live in poverty and suffer from the lowest employment rate of any ethnic group. This situation is repeated across Europe.

Without examining these broad contexts, it is difficult, if not impossible, to understand the intensity of the anger and anguish among Muslims that the recent blasphemy (The Ugly), i.e., the release of the anti-Islam film, has provoked. There is no denying that secularism, Islamophobia, and the perceived hypocrisy of Islam being associated with terrorism appropriate the Western language of blasphemy. Perhaps, it is also a convenient ideology at a time when Western armies occupy Afghanistan, Iraq and Libya, and when the US government and Israeli lobby menace Iran.

It is fair to say that this about sums up the general opinion of the international community that unless the Islamophobic tide, the secular currents and the illegal wars waged against Muslims in the name of “war on terror” are condemned and contained, there is a clear risk that the events surrounding the sacrilegious movie might be a precursor for a far greater disaster in the near future. We have all been warned!